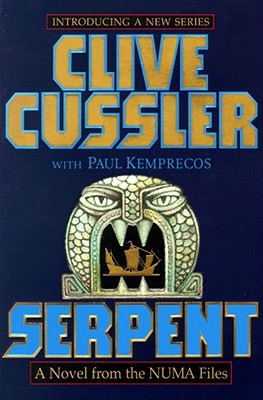 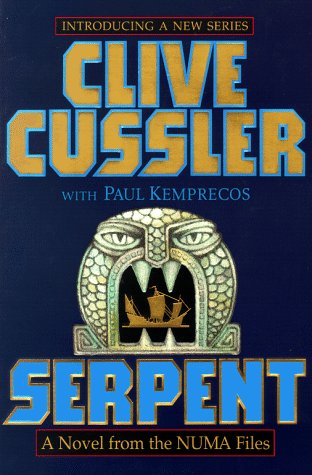 Serpent: A Novel from the NUMA Files (NUMA Files Series Book One)

INTRODUCING KURT AUSTIN
From the classic novel "Raise the Titanic " to his latest blockbuster "Flood Tide, " Clive Cussler and his fictional alter ego Dirk Pitt(R) have earned legions of fans worldwide. Now, the author of fifteen consecutive bestsellers unleashes a hero for the next millennium in an electrifying new series of unrelenting action and edge-of-your-seat thrills.
On the bottom of the icy sea off Nantucket lies the battered remains of the Italian luxury liner, "Andrea Doria." But few know that within its bowels rests a priceless pre-Columbian antiquity -- a treasure that now holds the key to a puzzle that is costing people their lives.
For Kurt Austin, the leader of a courageous National Underwater Marine Agency (NUMA) exploration team, the killing begins when he makes a daring rescue of a beautiful marine archaeologist. The target of a powerful Texas industrialist named Halcon, Nina Kirov was attacked off the coast of Morocco after her discovery of a carved stone head that may prove Christopher Columbus was not the first European to discover America. Soon Kurt and Nina embark on a deadly mission to uncover Halcon's masterful plan -- an insidious scheme that would have him carve out a new nation from the southwest United States and Mexico, and ride to power on a wave of death and destruction.
With Austin's elite NUMA crew attacking the murderous conspiracy from different sides, an extraordinary truth emerges: that Columbus may have made a fifth, unknown voyage to America in search of a magnificent treasure. And that the silent, steel hull of the "Andrea Doria" not only holds the answer to what the explorer may have found -- but the fate of the United States itself.

Title: Serpent: A Novel from the NUMA Files (NUMA Files Series Book One)

Serpent: A Novel from the NUMA Files (NUMA Files Series Book One)