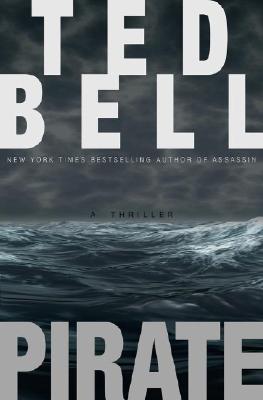 All Orders Shipped With Tracking And Delivery Confirmation Numbers.

In Ted Bell's scorching follow-up to his "New York Times" bestseller Assassin, intrepid intelligence operative Alex Hawke must thwart a secret, deadly alliance between China and France before they annihilate everything and everyone in their headlong rush toward world domination.

Aboard the "Star of Shanghai" in the south of France, an American spy is held captive. He possesses vital, explosive intelligence linking two nations and one horrifying plot. If he is not rescued, he faces certain torture and inevitable death. Nearby, in a seaside hotel, a man still haunted by the loss of his wife two years earlier finds comfort in the arms of a beautiful Chinese actress--but is she to be trusted? So begins Pirate, an electrifying thriller marking the return of international counterterrorist Alex Hawke. In Paris, a ruthless descendant of Napoleon has risen to power, hell-bent on restoring France's former glory. His fiery ambitions are cynically stoked by a coterie of cold-blooded Mandarins, plotting behind the gates of Beijing's Forbidden City. Cloaked in secrecy, this unholy alliance devises a twisted global plan, backed by China's growing nuclear arsenal, that will send America and the world to the brink of a gutwrenching showdown.

With the aid of his old friend and former Navy SEAL, Stokely Jones, Hawke sets out to investigate the deadly connections that bind the French-Chinese axis. Together, they discover that a powerful German industrialist may hold the key, somewhere inside the walls of his Bavarian mountain lair. Meanwhile, clues to an old and gruesome murder in Paris lead to New York City, where horrifying evidence could finally bring a madman to his knees. In the end, as Americanand British forces prepare to defend a sovereign and oil-rich Gulf nation against unwilling occupation, the terror is all too real. The world is once more balanced on the knife-edge of a full-blown nuclear confrontation.

Hawke must once more prepare to hurl himself deep into the nightmare visions of madmen. He must garner every ounce of strength, courage, and useful pain from his past. He must defeat this enemy or else forfeit the lives of untold thousands, including his own, to an axis of evil no historian could have ever predicted.

Packed with unrelenting action, glamour, and high style, and featuring the spectacular Alex Hawke, who time and again transports readers to the edge of danger, Pirate is a spellbinding thriller. Be prepared for Alex Hawke's most daunting and heart-pounding mission yet. Here is an author who gets you in the palm of his hand...and then clenches his fist