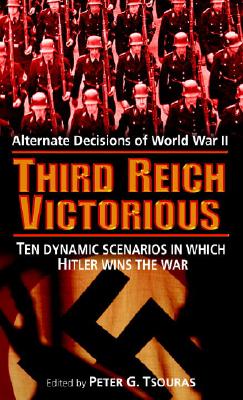 Light creases to the spine with light edgewear to cover. Pages clean and unmarked. All Orders Shipped With Tracking And Delivery Confirmation Numbers.

This book is a stimulating and entirely plausible insight into how Hitler and his generals might have defeated the Allies, and a convincing sideways look at the Third Reich's bid at world domination in World War II. What would have happened if, for example, the Germans captured the whole of the BEF at Dunkirk? Or if the RAF had been defeated in the Battle of Britain? What if the U-Boats had strangled Britain with an impregnable blockade, if Rommel had been triumphant in North Africa or the Germans had beaten the Red Army at Kursk? The authors, writing as if these and other world-changing events had really happened, project realistic scenarios based on the true capabilities and circumstances of the opposing forces. Third Reich Victorious is a spirited and terrifying alternate history, and a telling insight into the dramatic possibilities of World War II.