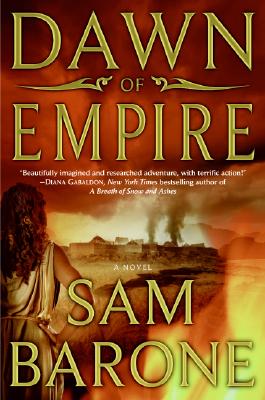 Dawn of Empire: A Novel

The leader of a band of marauding barbarians, Thutmose-sin is a warrior gifted by the gods with extraordinary perception and cunning. To survive, he and his people plunder and pillage, killing and enslaving the dirt-eaters who dwell in villages across the plains. But Thutmose-sin also secretly fears these enemies, for they possess a weapon far deadlier than any bow or lance: the food they coax from the ground that allows them to multiply. Someday, he worries, there might be so many of them that even his warriors will not be able to kill them all. And in a prosperous settlement near the headwaters of the Tigris, his suspicions are about to come true . . .

Determined to preserve their way of life, the peaceful people of Orak refuse to flee the oncoming barbarians. Instead, they devise a bold, untested plan of defense: build a wall around the village high and strong enough to repel the invaders. Under the guidance of an outcast barbarian named Eskkar and his true love, an enchanting and wise slave girl named Trella, the villagers begin the wall's construction and await the epic battle that will pit them against the unstoppable barbarians&#8212a battle whose outcome will change the world forever.