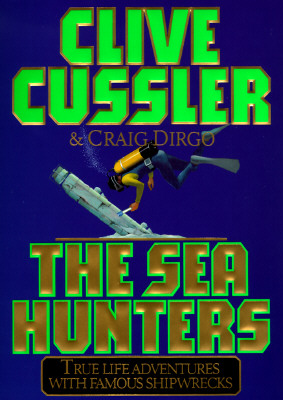 Clive Cussler is acclaimed worldwide as the Grandmaster of Adventure, and his series of novels starring his action hero Dirk Pitt now have over 70,000,000 copies in print.

Whether it's deep-sea diving, climbing mountains, or driving classic automobiles, adventure is at the heart of Cussler's life. As Cussler himself writes, "Providing my readers adventure tales based around a devil-may-care character by the name of Dirk Pitt is only one chapter of my existence. I'm addicted to the challenge of the search, whether it's for lost ship- wrecks, airplanes, steam locomotives, or people."

In The Sea Hunters, his first nonfiction book, Cussler explores the special world of undersea adventure that inspired and has its fictional parallel in the Dirk Pitt novels. He describes his lifelong love for the sea and ships, and how his involvement with the search for John Paul Jones's famous Revolutionary War ship, the Bonhomme Richard, led to his establishing the NUMA (National Underwater and Marine Agency) Foundation, a nonprofit organization dedicated to the discovery and preservation of historic shipwrecks.

From the more than sixty shipwrecks Cussler and his NUMA volunteers have found, he has chosen the twelve most interesting, whether because of the ship's history, the circumstances of its sinking, or the trouble, frustration, and peril that were encountered while trying to find the sunken wreck.

With the same wonderful storytelling that Cussler brings to his novels, he describes his searches for such ships as the Union 24-gun frigate Cumberland, sunk during the Civil War by the Confederate ironclad CSS Virginia (formerly the Merrimack); the Confederate Hunley, which became the firstsubmarine in history to sink a warship; the U-21, a German U-boat, which during World War I became the first sub to sink a warship and escape; and the American troop transport Leopoldville, which was destroyed by a German submarine on Christmas Eve, 1944, with huge loss of life; as well as Engine #51, the lost locomotive of Kiowa Creek, which roared off a storm-weakened high bridge in 1878.

The wrecks date as far back as 1840 and span the continental United States, the Atlantic Ocean, and the North Sea.

As he does in the Dirk Pitt novels, Cussler opens each story with a creative dramatization of the ship and the way she met her end, then brings the story into the present as he describes the immense research and careful preparation so often necessary to find a long lost ship.

For example, he describes the tragic fate of the steamboat Lexington, which burst into flames in the frigid winter of 1840, causing the loss of over 150 lives -- but sparing Henry Wadsworth Longfellow, who missed the trip only because he arrived at the dock seconds too late.

There's also the odd fate of the steamboat Charleston, which became the warship Zavala and which was so horribly damaged in a terrible Atlantic storm in 1842 that it was abandoned in a Galveston, Texas, marsh, and slowly sank from view. In tracing its location, Clive Cussler finally found it -- under a parking lot

Dramatic, compelling, and personal, Clive Cussler's The Sea Hunters is as exciting and satisfy- ing as the best of his Dirk Pitt novels.